The ASUS USB-AC56 is the most simplistic way of adding Wi-Fi capabilities to your PC or laptop. Just connect it to a USB port, install the drivers and you’re good to go. 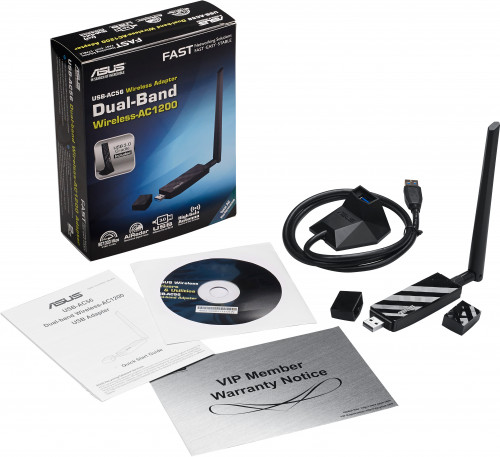 The ASUS USB-AC56 is a dual-band 802.11ac Wi-Fi adapter with a USB 3.0 connection that brings high-performance wireless networking support to desktop and notebook PCs. The USB-AC56 features a USB 3.0 connection with support for wireless data rates up to 400 Mbit/s at 2.4 GHz and 867 Mbit/s at 5 GHz with compatible routers. Suitable for use with both desktop and notebook PCs, the USB-AC56 features a dual internal antenna design for great wireless network coverage with minimal desktop clutter and a removable high-gain external antenna that boosts reception still further in weak Wi-Fi signal areas.

The USB-AC56 wireless-AC1300 USB adapter can cover larger homes and offices, including multi-floor locations. Its detachable high-gain external antenna and strong dual internal antennas provide ample transmission power for bigger areas. The detachable antenna can be removed to reduce power draw and emissions should medium-range coverage be sufficient. It can also be upgraded with a more powerful antenna if needed. 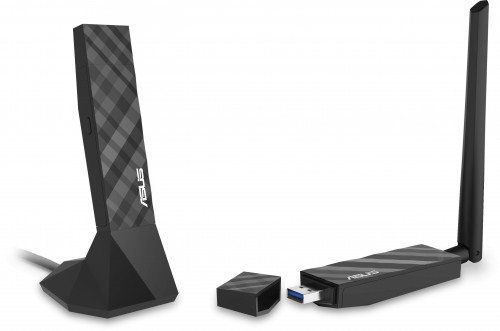 Connect the USB-AC56 either directly to a USB or via the included USB cradle.

USB 3.0 allows the USB-AC56 Dual-Band Wireless-AC1300 USB wireless adapter to pair with notebooks and desktops using a bandwidth up to ten times that of USB 2.0. It means the full advantage of 802.11ac networking is realised, as the adapter has enough throughput overhead to support much faster network speeds.